What is Water Jet Cutting?

WHAT IS A WATERJET CUTTER?

Waterjet cutting is simply an accelerated erosion process within a selected material. Highly pressurised water is fired through a ruby or diamond nozzle into a mixing chamber. This pressure creates a vacuum and draws garnet sand into the stream where it is then fired at the object in place for cutting.

The sand particles eat away at the material causing the effect of erosion to take place at such a high speed it is deemed as cutting. 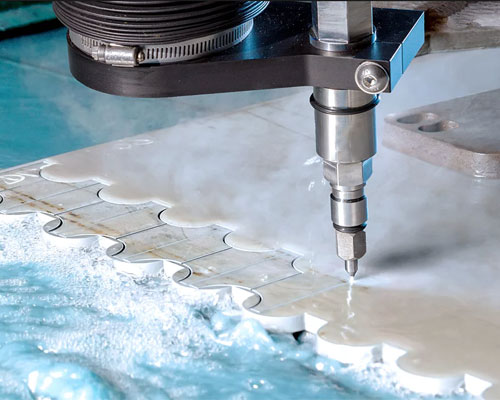 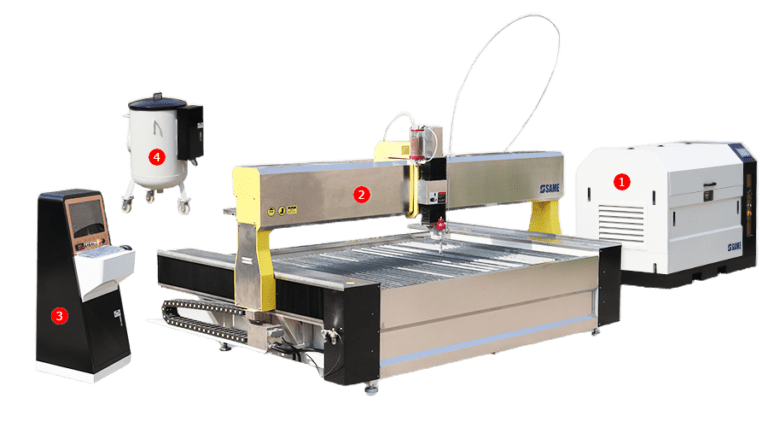 Automatic grinding and providing the particles needed for the cutting process

THE HISTORY OF WATERJET CUTTING

Dating back to the 1930s, waterjet were initially used as industrial cutting equipment, but only for soft materials such as paper.as researchers around the world looked for new ways to cut systems efficiently, waterjet technology developed in the postwar era.

In 1960, Dr. Norman Charles Franz pioneered the development of industrial waterjet cutting technology, creating the first industrial water knife to cut wood, the first waterjet used in industry, and has been running successfully for many years.

In 1979, Dr. Mohamed Hashish worked in a fluid research laboratory and began to study ways to increase the cutting energy of waterjet to cut metals and other hard materials. Dr Hashish is widely regarded as the father of the polished water knife. He invented a method of sanding a regular water sprayer. He uses garnets, a material often used on sandpaper, as a polishing material. With this method, the waterjet (which contains sand) can cut almost any material.

In 1983, the world’s first commercial sanding waterjet cutting system was introduced and used to cut automotive glass. The first users of the technology were the aerospace industry, who found the waterjet to be the ideal tool for cutting stainless steel, titanium and high-strength lightweight composites and carbon fiber composites used in military aircraft (now used in civil aircraft).

Since then, abrasive waterjets have been used in many other industries, such as processing plants, stone, ceramic tiles, glass, jet engines, construction, nuclear industry, shipyards, and more.

Waterjet can already be used to cut wood and metal

The water jet has been developed into a polished water jet, this method can cut almost any material

How does a waterjet cutting machine work？

Waterjet cutting is to accelerate the corrosion process in the material.

Highly pressurised water is fired through a ruby or diamond nozzle into a mixing chamber. This pressure creates a vacuum and draws garnet sand into the stream where it is then fired at the object in place for cutting.

What are the components of the waterjet cutting？

The waterjet cutting system consists of a high-pressure water pump, a mobile nozzle and a cutting platform where the working material is placed. The control system is basically composed, and its composition can be fully expanded, upgraded and customized according to customer needs.

What Materials Can Be Cut?

Grinding water jets can cut almost anything in the world, such as metal, stone, glass, etc., and many food processing companies use pure water cutting machines to cut food.

What is unique about Waterjet cutting compared to other cutting technologies?